Offspring: A Novel of the Silent Empire


A human voice broke into song. Immediately the Ched-Balaar joined in, chattering their teeth in rhythmic counterpoint. The procession came to a halt as everyone sang. A dark-skinned woman in dreadlocks and a hand-knit scarf climbed up on a balcony rail. Several of the holographic signs in the procession erased themselves and called up new text.

We are sitting on unimaginable wealth, the woman shouted. Bellerophon is rich in metal—gold, silver, iron, uranium, and more! And yet our people starve. How did we let this happen? Our ancestors thought they were being wise when they laid the restrictions on mining and farming and talltree harvesting, the woman shouted. Perhaps were. Perhaps they preserved the environment. But that was almost a thousand years ago, and times have changed.

We are responsible adults, not children. Mining and farming and harvesting would mean jobs for the people! More cheers. Food for our children! Security for everyone! Mitchell Foxglove and the Federals opposed the mining restrictions long before the Despair, and he opposes them now. The Unionists and the Populists supported the restrictions, and look where it got us—frozen, starving, and afraid.


Foxglove needs our vote, and we have to give it to him. The dreadlocked woman jumped down to join them.

Protesters both human and Ched-Balaar continued along the office building walkway and tromped down a wide wooden staircase that wound around a talltree trunk. One of the little girls threw Kendi a last glance before marching out of sight. Kendi sighed and released his medallion. The edges had dug furrows in his palm. How could he possibly get het up about a sim-game contract when people staved within ten meters of his office door? He privately decided to donate a portion of the sim-game proceeds to a charity that helped the hungry. Maybe the First Church of Irfan.

Orphans and other needy people fell under their bailiwick. The last of the procession cleared the walkway, and the Blessed and Most Beautiful Monastery of the Children of Irfan went back to moping through a crisp spring afternoon. The small audience that had gathered to watch the march drifted away like limp petals on a tired wind. 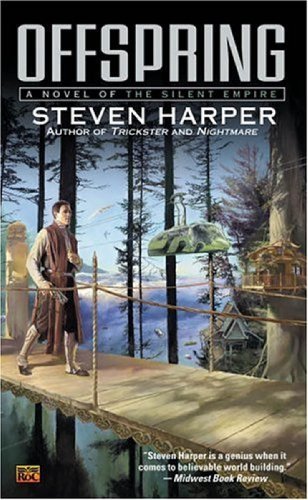 Some were brown-robed monks—Children of Irfan—and others were lay people who worked for the monastery, though these days there were fewer and fewer jobs. Although most of the people were human or Ched-Balaar, a fair number of other species fed into the mix as well, and the air was filled with the quiet chatter of human voices, the muted clatter of Ched-Balaar tooth-talk, and the squeaks, squawks, and quacks of other species. Gondola cars strung on overhead cables coasted by, and a monorail train snaked between the massive talltree branches.

Kendi leaned on a heavy wooden railing and looked out over the arboreal monastery. A man and a woman in brown robes passed Kendi by, their voices barely audible. A teenage boy walked in silence with a being that looked like a giant caterpillar, and their steps dragged. Kendi sympathized. Before the Despair, all the monks at the monastery had been Silent, able to enter the Dream.

After the Despair, only a tiny handful had retained their Silence. For the Silent, exile from the Dream was like being struck blind or deaf. Not everyone had adjusted well. Behind him stood Ched-Hisak, one of the equinoid Ched-Balaar. Like all of his species, the Ched-Hisak was the size of a small horse.

Hay-colored fur covered a stocky body and four legs that ended in heavily-clawed feet. A thick, sinuous neck rose between two muscular arms that ended in four-fingered hands. His head was flat, with wide-set brown eyes and a lipless mouth filled with shovel-like teeth. His forehead sported a small hole just above and between his eyes.

His palms felt like warm suede. Ched-Hisak opened his mouth and his teeth clattered in a complex rhythm punctuated by occasional soft hooting sounds from the nasal opening between his eyes. Half a lifetime of living among the Ched-Balaar let Kendi understand the language perfectly, though he had no hope of reproducing it. I wish to make you an invitation, Ched-Hisak chattered after exchanging a few pleasantries. It is time for Ched-Nel and Ched-Pek to leave the den, and it would please me much if you and Ben attended the ceremony.

Kendi blinked and suppressed a small gasp. It would be an honor!

Offspring: A Novel of the Silent Empire by Steven Harper - Book - Read Online

But Ched-Hisak—are you sure you want us there? Ched-Hisak dipped his head once. You and Ben have been good and kind friends to me and my family for a long time, and it is my wish that you attend. Four days from now in our home. We begin at noon. I have hope it will be a fine and festive occasion in a difficult time. It has been a difficult eight months, Ched-Hisak chattered. Our entire civilization was based on every one of us learning to reach the Dream. Now that has been taken from us.

Where to find Steven Harper online

I cannot find fault with you, Kendi, Ched-Hisak said mildly. You are the reason the Dream still exists, limited though it is. In any case, there is nothing you personally could have done.

We Ched-Balaar have gone from Silent to Silenced. That is the way of it.

Dean Koontz: On Jane Hawk's motivation and the plot - The Silent Corner

A second Ched-Balaar had approached. This one was a little shorter than Ched-Hisak, with paler fur and startling violet eyes. She wore no monastery ring, and a swirling, curlicue pattern had been shaved into her pelt.